Free shipping on all orders $39 and up 📦

What to avoid during the second trimester [Cradle Club]

Your Guide to the Second Trimester of Pregnancy 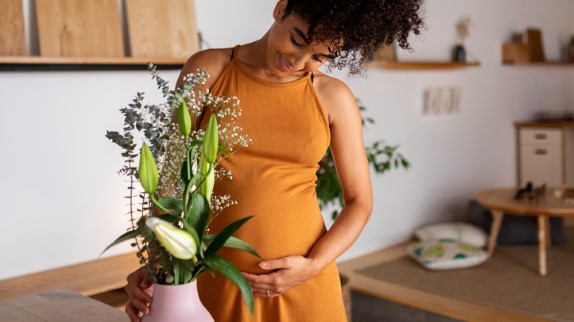 The next three months bring lots of changes for your growing fetus and, most likely, welcome relief from early pregnancy symptoms for you. Here's more on what to expect.

Welcome to your second trimester — for many women, the most comfortable of all three. With the arrival of this milestone, you’ll experience some welcome changes.

For starters, most of your early pregnancy symptoms will ease up or even disappear. You’ll likely feel less queasy (which means food may finally smell and taste good for the first time in a long while), your energy levels should be picking up and your breasts will still be bigger but will feel a lot less tender.

Most amazing of all: By the end of this trimester, the bulge in your lower abdomen may be looking less like the remains of a large lunch and more like the beginnings of a pregnant belly.

When does the second trimester start and end?

What are the symptoms of second trimester pregnancy?

Many of the earlier pregnancy symptoms — like nausea and breast tenderness — will subside during the second trimester, while others (like heartburn and constipation) may persist.

At the same time, new changes may pop up for the first time as your belly continues to grow and the levels of pregnancy hormones in your body keep rising. Here are some symptoms that can appear in the second trimester:

More About the Second Trimester

All of the above are perfectly normal and temporary — as are feelings of apprehension, irritability, forgetfulness and even frustration at looking not quite pregnant yet.

There may also be some big changes in the bedroom during the second trimester. Some pregnant people find themselves hotter than ever, with extra blood flowing to all the right spots. More often, however, pregnancy can make your sex life go a little haywire as you cope with your changing body and mood-killing symptoms.

A few things to keep in mind: Communication is key to avoiding resentment, so keep talking through the dry spells. And remember, sex won’t hurt — or emotionally scar — your fetus. (In fact, a little rocking and rolling may even lull baby to sleep.)


When should I call the doctor about second trimester symptoms?

Odds are that once you make it to your second trimester, it should be relatively smooth sailing for the next three months. But there are a few symptoms that always warrant a call to your doctor, including heavy vaginal bleeding, severe abdominal pain and fever over 101.5 degrees Fahrenheit.

Also keep an eye out for signs of gestational diabetes, which usually starts between around week 24 and week 28 of pregnancy, including extreme thirst, frequent and copious urination, extreme fatigue, and snoring. And not to worry: You'll be getting a glucose test during that same timeframe to know for sure.

Also talk to your doctor if you notice sudden weight gain, significant vision changes and severe swelling in the face and hands, which could be signs of preeclampsia.

How much does a baby grow in the second trimester?

Your baby is very, very busy in the second trimester, when fetal development really takes off. By week 18 of pregnancy, baby weighs about as much as a chicken breast, and can even yawn and hiccup.

By around week 21 you should be able to feel your little gymnast’s newly coordinated arms and legs as they give you little jabs and kicks.

By about week 23, your baby takes a cue from you and starts to pack on the pounds — and may even weigh double that amount by the next four weeks. At the end of your second trimester, you'll have a 2-pound human in your belly!

A few more exciting things going on this trimester:

Words to live by now: Eat well, exercise regularly and get plenty of rest. Here are the top to-do's for the second trimester:

What to avoid during the second trimester

With the worst of the nausea behind you, you might be feeling a lot like your old, pre-pregnancy self. But now that you’re in your second trimester, there are a few more things you should steer clear of, including:

One of the best parts about the second trimester (other than a welcome break from morning sickness)? Knowing that the third trimester is right around the corner — and that baby will be here before you know it!

*All information has been provided by https://www.whattoexpect.com/second-trimester-of-pregnancy.aspx